History, past to present 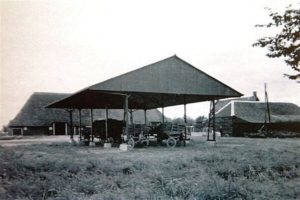 In 1660 already farmhouse “de Kienstee” is mentioned in this neighbourhood. First the Kien family were the owners and later on
the Van Gitters family from Middelburg. Since 1803 the Cammaert family owns the farm. The farm survived 2 world wars.
In World War I a German airplane landed in the fields of the farm and we still have a picture of this event in our house. Nowadays people would take a photograph. In World War II the big barn was set on fire by the
Canadians because they thought the enemy hid in there. This barn was rebuilt only not as large and without the thatched roof.

In the past the farm was surrounded by a “wall”, which looks like a moat.
The only access to the farm was via a bridge. The meadows were around the farm and the orchard was behind it.
At that time it was a cattle growing and arable farm. Big workhorses were the machines on the field.
But times have changed and now the farm is only arable. The farmer himself and his father work with their tractors and machines and have more HP than all horses which were ever on the farm.

Since 2000 we also have a Bed and Breakfast. Some older buildings on the farm were rebuilt in the original style and in them we made nice and cosy guestrooms.

The farm area is about 160 acres.
Below you see a list of crops that we grow:

The farmer and his daughter work the fields themselves only when onions, sugar beets or flax are harvested an agricultural contractor is hired. After the harvest the fields are prepared again for next year’s harvest. A farmer always depends from the weather and a lot of work has to be done before the next harvest.